Those for whom horse racing has been a passion will tell you: race horses are indeed athletes. Their innate desire to avoid danger and injury is overruled by the intense competitive spirit which burns within them, the same as it is with human athletes. This is the way-back look into the history of a world-famous athlete, America’s first Triple Crown Winner, who now rests in Wyoming. In all of racing history, only thirteen horses have achieved the Triple Crown. 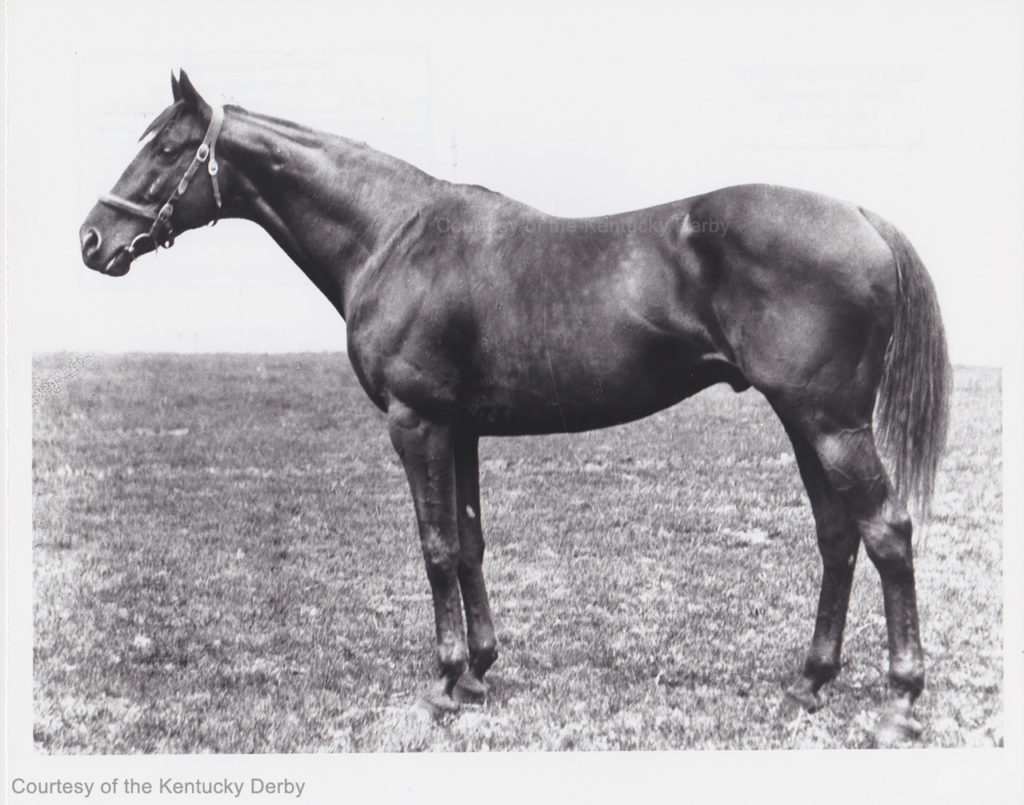 The Triple Crown is a series of three thoroughbred horse races for three-year-old horses, which take place in May and early June of each year.  The Triple Crown of horse racing is considered one of the most difficult accomplishments in horse racing, and possibly all of sports championships.  The grueling schedule requires a three year old horse to win the Kentucky Derby, then two weeks later win the Preakness Stakes, and then three weeks later win the Belmont Stakes.  In a letter dated November 6th The Blood-Horse magazine received an inquiry from Casper, Wyoming, the writer requesting information concerning the stud record of Sir Barton, who for three years had been standing at Dr. J.R. Hylton’s ranch in Douglas, Wyoming, the county seat of Converse County, on the North Platte River. The letter stated: “Sir Barton is 21 years old but still very beautiful, and has the most satiny coat I ever touched. I saw him a week ago.” The letter was dated November 6th, however the former champion, and world famous athlete, had died on October 30th

Yes, Sir Barton had been dead nearly a week when the letter was mailed. According to a telegram from Dr. Hylton to The Blood-Horse magazine, the former champion died from an attack of acute intestinal colic on October 30, thus ending an equine career which constitutes one of the spectacular chapters of American turf history.  Dr. Hylton stated that the horse was very vigorous and in good flesh, and “looked considerably less than his age,” but that he had had several attacks of colic in that final year. The telegram continued: “He had been at the Dr. J.R. Hylton ranch for the past four years and bred to some very fine mares. Several of his yearlings and 2-year-olds are in California and will start at Santa Anita. They are upstanding, fine-looking colts.”

It all began in the winter of 1915-16 when the old-time English trainer Vivian Gooch was a guest of his good friend John E. Madden at Hamburg Place in Lexington, Kentucky. It’s reported that Gooch was not in the best of spirits, and at times appeared very much depressed. Madden held with those ‘wise men’ who insist that the ownership of a young Thoroughbred is one of the best tonics a man can have, and he presented to Gooch half-interest in a foal,  yet to be born, the product of a mating of Star Shoot and Lady Sterling, the dam of Sir Martin. Lady Sterling was 17 years old in the spring of 1916, and the previous year had been mated with Star Shoot, then near the height of a great career as a sire, for the first time.

The foal that would become known far and wide as Sir Barton was born on April 26, in a barn which has since become famous as the birthplace of five winners of the Kentucky Derby. He was a beautiful chestnut colt, and when still a weanling Madden purchased from Gooch the interest he had given. In the summer of 1918 the colt, named Sir Barton, began racing under the colors of J.E. Madden.

Sir Barton was marked as a high-class horse from his first day on the racetrack, but finished his 2-year-old season a maiden, with only one placing to his credit, but that was a second in the Futurity. As a 2-year-old, Sir Barton’s lofty pedigree proved to be a bust. He raced four times for Madden, finishing out of the money each time. Plagued by tender hooves, a trait he inherited from his sire, the malady gave him a particularly nasty disposition. Grouchy and stubborn, Sir Barton had little time for people, horses, and other animals with one exception — his groom, Toots Thompson.

Sir Barton’s first start as a three-year-old was in the Kentucky Derby and over a sloppy track he led every step of the way and won from second-place Billy Kelly by five lengths. From there forward the little (15.21⁄2) son of Star Shoot was a great horse. He went on to sweep through the Preakness, the Withers, and the Belmont Stakes before he was beaten. In the Preakness Sir Barton led all the way over a fast track, beating Eternal (the best 2-year-old of 1918) by four lengths. He again handled Eternal easily in the Withers. In the Belmont Stakes he won by five lengths from Sweep On and set a new American record of 2:172⁄5 for 13⁄8 miles.

At Aqueduct, in the Dwyer Stakes, Sir Barton placed second behind Purchase who beat him three lengths. Willie Knapp rode him in this race, and, according to trainer Bedwell, it was the first time a whip had ever been used on the colt. The trainer blames this fact for the defeat of the little horse which had won four of the classics of the American Turf. After the race, according to the trainer, it was found that the whip had cut him on the flank and on the scrotum.

Sir Barton did not race at Saratoga that year, but was put aside until the fall season began in Maryland. At the end of his 3-year-old season, Sir Barton was recognized as the best horse of his year, and he was the leading money winner with a total of $88,250.

But how did America’s very first Triple Crown Winner Sir Barton end up in Wyoming?

In 1920, at the age of 4, Sir Barton’s star, bright as it was, had been dimmed by the greater luster of the year’s 3-year-old sensation, Man o’ War. Abe Orpen offered a purse of $80,000 for a match between the two at Kenilworth Park, Windsor, Canada, and the two great horses met there in October. It was one of the most notable spectacles of the American Turf, but the race itself was a farce. Sir Barton, obviously not himself, was under the whip in the first quarter-mile, and never showed a flash of his true class, while the once beaten son of Fair Play galloped along in front, to a new track record of 2:03 for the 10 furlongs.

Many horsemen and turf writers thought, and still think, that Sir Barton was not in condition for this match race, that he had been sore for weeks before the race and was still sore when the match came off. But trainer Bedwell claimed that the track at Kenilworth Park was so hard that it was impossible for a horse with tender feet to perform well over it. Bedwell stated in an interview that the first time he breezed Sir Barton over the Kenilworth course he pinned his ears back, refusing to take kindly to his work. Mr. Bedwell said that he warned that the horse would not do well over that sort of track. Sir Barton, the trainer said, always had very poor feet as his soles were so thin that he had to be shod with a layer of felt above the plate at all times. And to make matters worse, Sir Barton was a horse which required much work to keep him in condition.

The match with Man o’ War signaled the end of Sir Barton as a champion. He started three additional times that fall and ran well, but not like he had in the past. He was third in the Laurel Stakes and Pimlico Serial Weight-For-Age Race No. 2, but Mad Hatter was now able to beat him at level weights. In Serial No. 3 he managed to catch Mad Hatter in the closing strides, but was second to Billy Kelly. There Sir Barton’s racing career ended. In three seasons he had started 31 times, won 13 races, finished second six times, third five times, unplaced seven times, and earned $116,857.

In early 1921, controversy over H.G. Bedwell’s support of disgraced jockey Cal Shilling forced Ross to fire Bedwell and to hire Henry McDaniel, a future U. S. Racing Hall of Fame inductee known for training Exterminator as a three-year-old. McDaniel attempted to prepare Sir Barton to race as a five-year-old, but worried that continued training would cause the Triple Crown winner to break down. Ross retired Sir Barton to stud that year and in August 1921 sold the champion to Montfort and B.B. Jones, who brought the chestnut son of Star Shoot to their Audley Farm in Berryville, Virginia, where he remained until 1932. The price paid for him was not stated at the time, but highly rumoured to be $75,000.

In 1932, Sir Barton became part of the U.S. Army Remount Service, first at Front Royal, Virginia and then, later that year, in Fort Robinson, Nebraska. Thoroughbred breeder and Wyoming rancher J.R. Hylton received Sir Barton from the Remount Service and brought him to his ranch outside of Douglas.

Sir Barton died of colic on October 30, 1937 and was originally buried on Hylton’s ranch in the foothills of the Laramie Mountains. Later his remains were moved to Washington Park in Douglas where a memorial was erected to honor America’s first Triple Crown winner. Gordon Turner raised money for and orchestrated the move.

Beautiful Washington Park in Douglas is the site of the memorial to Sir Barton, the first thoroughbred colt to win the American Triple Crown, where a statue pays tribute to the famous horse and marks his final resting place. In 2019 the Sir Barton Centennial was celebrated in Douglas complete with a special logo, events and activities, not the least of which was the timing and world premiere release of Born To Rein, the documentary film that coincided with 100th Anniversary of Sir Barton, winning the 1919 Kentucky Derby, Preakness Stakes, and Belmont Stakes. The film’s content follows his journey, from before the founding of his birthplace at Hamburg Place in Lexington, Ky., to his final resting place in Washington Park in Douglas, Wyoming.